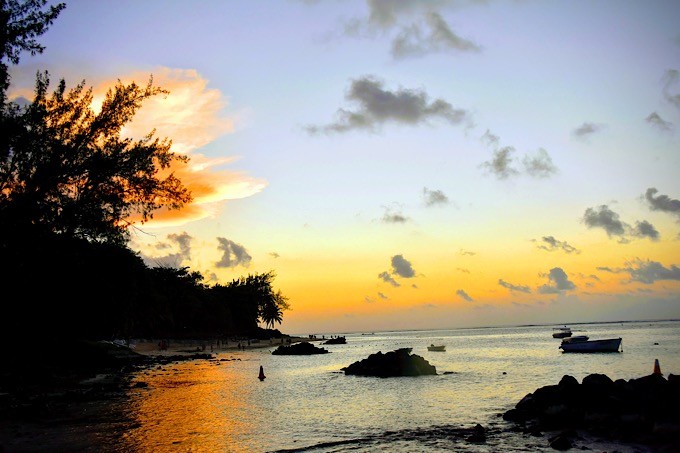 The cool seawater lapped against the jet black boulders like liquid turquoise. It was hard to believe I was in Mauritius, a remote independent island east of Madagascar. It’s been a favorite of Europeans and South Africans for decades, but not a lot of  Americans make the 20 hour flight. As soon as you see the blue water and white sand, it all suddenly feels worthwhile.

Renting a car is the best way to visit this beautiful country. You’ll have to be prepared to drive on the left side of the road, but that’s not really as difficult as it sounds. You can get from the east coast to the west in an hour, and in my opinion that should be the first thing you do. Get your car and head towards Flic et Flac.

Flic et Flac is a great town to use as a base to explore the southwest part of the island. There’s a nice stretch of beach, good guest house options, and lots of restaurants and bars along the beach area. There’s several beach food stalls that serve fast inexpensive food like Roti aka Vinoda (where I got a really delicious octopus roti and a local almond milk drink that I’m still craving). Just south of Flic et Flac is Black River that has a wonderful restaurant called The Bay where you can view an Indian Ocean sunset and watch the giant fruit bats soar out of hiding for their nightly flight. The best view in the entire island is even further south at Le Chamarel Restaurant. The panoramic terrace on the hill gives you a 180 degree view of the UNESCO mountain of Le Morne to somewhere north past Black River. Nothing is really more than two hours drive from where you are.

Mauritius has two types of travel: guesthouse type hotels and luxury resorts. There’s not a lot of choices in between. The resorts have hammocks and manicured beaches, but can average $500-700/night. Guesthouses  have a more relaxed vibe, but you have to be aware of reception hours. Some close as early as 6pm and don’t even answer the phone after that. I learned a hard lesson and ended up spending one night in my car. Port Louis is the largest town on the island, but it looks like it’s name implies: a port. Many travelers stop in to visit it’s market and harbor, but you won’t find anything resembling the beaches you’ve seen on Mauritius travel posters. There is a nice promenade with shops and restaurants, a Dutch windmill reconstruction and an interesting postal museum.

After you’ve gotten your fill of the beach, head towards Chameral Falls. The drive up the mountain road is quite scenic and different from the main road across the island. Once you reach the falls, there are two overlooks. These twin falls aren’t the biggest you’ll ever see, but they’re very picturesque and visiting nearby 7 Coloured Earth Geopark gives you two attractions right next to each other. Thus named because of the seven different colors of sand that form a geological oddity of hardened sand dunes, seven earths is a weird fun stop complete with a bar and a mini-botanical garden with a few giant tortoises. If you really like waterfalls and hiking, you can’t do much better than a tour of Tamarin Falls. The hike takes about 6 hours, but the views of the seven cascades are some of the most beautiful in the country.

Black Rivers Gorge Is a national park that one can drive or bike through with several scenic lookouts of waterfalls as well as the actual gorge. Keep a lookout for the timid long tailed macaques lurking in the forest. Head east out of the park to the “holy lake” about 15 minutes away. The entrance is flanked by two gargantuan Indian god statues you can’t miss. The lake is a picturesque Hindu Mecca considered to be one of the most important holy sites outside of India. On the banks of this small body of water, devotees offer sacrifices of coconuts and flowers. Around the lake is statues of the most popular Indian deities. Monkeys can also sometimes be spotted eating bananas intended for the gods. It’s a beautiful spot early when the weather is cool before the crowds gather.

The most famous feature of Mauritius is the southwest peninsula and its looming mountain Le Morne. You can climb it, drive around it or just admire its majestic beauty as a backdrop to your beach photos. This peninsula is where most of the high dollar resorts are clustered. Surrounded by palms and well manicured public beaches, these hotels are priced from $500-1000/night. If you’re not staying there, don’t expect to be welcomed at their bars or restaurants. We tried to order a cocktail from a beach bar at the Lux and were practically chased off the property when we admitted we weren’t booked at the hotel. For $300/pp, you can take a 15 minute helicopter ride to see the underwater waterfall illusion nearby. From the air, the colors of the water and sand  make it appear that there is a giant waterfall below the surface of the water.

Grand Baie is one of the most beautiful spots on the island. About an hour north of Flic et Flac, this calm stretch of beach is exactly what you expect from Mauritius: postcard perfect beach, colorful boats and cute little restaurants and bars along the beach. We found a very affordable airbnb about 5 minutes away.

On the way from the south to Grande Baie we stopped at the the Pamplemousses Botanical Garden, also known by its hard-to-remember name Sir Seewoosagur Ramgoolam Botanical Gardens or SSR. These gardens date back almost 300 years and have a vast collection of flora from around the world to Mauritian endemic species. One of the main draws is the giant lily pads that measure nearly 3 feet across. Cinnamon and other spice trees, plus many interesting varieties of palms will keep you interested even if you think plants are boring. Hire a guide (around $20) to show you the highlights.

The east coast’s big draw is the Ile aux Cerfs, a resort island reached by short ferry or catamaran ride from Blue Bay. Beaches can get crowded, but there’s plenty of private spots if you want to beat the crowds. Mahebourg is the best town to stay if you’re visiting the east coast or want to be near the airport for an early flight.

Finally, one of my favorite excursions was the  rum tasting about 30 minutes southwest of  Mahebourg at the Saint Aubin 1819 rhum distillery and former plantation. The property is a step back in time and you’ll get as many tastes of the flavored and various ages of rum as you dare ask for.

I was able to find a flight from Houston with a stopover in London for under $800. You can combine the trip with stops in nearby Reunion and Madagascar if you want to extend your adventure. 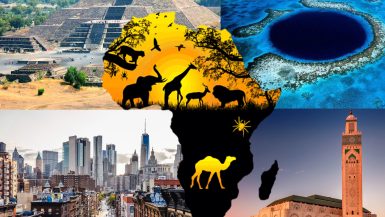