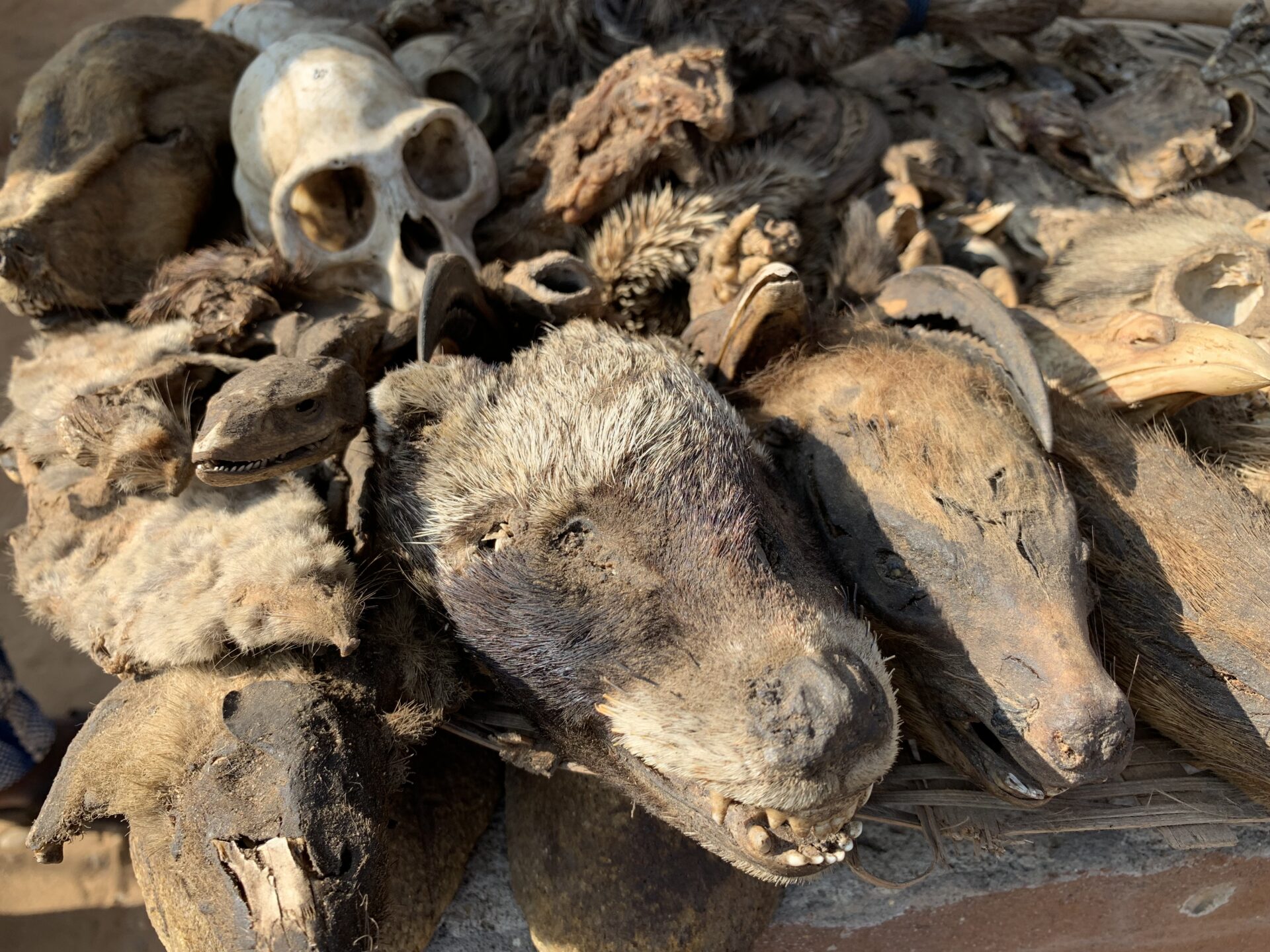 Visiting the Birthplace of Voodoo

The spiky wooden dolls that had been blessed with my name stood facing me on a dusty animal skin. I had been handed a smooth ebony nut, a tiny cloth bag on a necklace and an oddly shaped wooden talisman that I had been instructed to whisper into. The shaman and the guide were talking in an unintelligible language as they pushed the tortoise shells towards us. “Place the objects that you wish to take into the shell” the guide instructed.

Did I really need any of this stuff? Would I be cursed by the shaman if I didn’t take something? I never imagined that I’d be bartering with a voodoo priest for ritual objects that have undoubtedly inspired countless horror films. But business is business no matter where you are and after a quick negotiation, I was the new owner of a couple of voodoo dolls.  They already had nails in them. Those voodoo witch doctors think of everything.

The countries of Togo and Benin in west Africa are the main source for what Africans call “traditional religion”. These ancient beliefs are called Vodun and predate the arrival of Christianity and Islam and are the basis for what we commonly call voodoo. Native tribes didn’t have modern medicine before colonization, so herbal medicines, spells and animal sacrifices were solutions for healing the sick and bringing good luck to the villages. Mythical figures were believed to protect the people and punish wrongdoers.

Since the majority of the Atlantic slave trade occurred on the coast of west Africa, many traditional religious beliefs were lumped together and brought over by the slaves into the Caribbean and Americas. African pagan gods were combined with Catholic saints and evolved into Voudoo in Haiti and Santaria in Cuba.. Hollywood has played a huge role in taking the mythology of this primitive religion and turning it into a horror genre. And why not? Dead animals, snakes, ghosts, and witch doctors have a big creep factor in our culture. Voodoo has all of those elements.

Lome’ is a nice little town in Togo with its famous Grand Marche and the world’s largest fetish market. Fetish has a different definition here than what westerners usually imagine. It’s outside stalls look like a bizarre flea market full of voodoo dolls and dead animal parts. As shocking as it might look, it’s the equivalent of a CVS pharmacy.

Let’s say you’re having some family problems and you need to whip up a good spell to fix everything. You consult with the shaman (sort of like visiting the doctor) and you’re given a prescription. The prescription can include baboon skulls, dead birds, chameleon parts that are  ground into powder and then mixed into bath water, put on the skin or used in some other external way. A live animal might need to be sacrificed and have its blood poured into the ceremonial pit. Not sure how much blood? That’s what the shamans are for. They bless everything and guide you through the process.  The fetish market has visitors from neighboring countries buying, selling and trading some of the most bizarre objects you will ever encounter. If you recover, there’s all the proof you need that it worked.

In the nearby country of Benin, the town of Ouidah is considered the mecca of voodoo. The Temple of Pythons is the place to go if you need some good snake juju. The snakes are worshipped and the complex has a hut with the snake voodoo priests ready to assist with any ailment. It’s quite common for natives of this region to have scars on their faces to show which tribe they’re from. The python temple scars look like snake fangs were dragged across the cheek. The temple itself is a small room full of ball pythons wrapped around each other. I’m not afraid of snakes, but a whole room of the reptiles coiled together is creepy no matter how much you enjoy the little fellas. The snakes aren’t fed by the caretakers. They slither out at night to find their own dinner and then are returned to the temple by the villagers.

The town also has a sacred forest. The mythology holds that a famous chief turned into a tree and now lives in the center of the grove with a smeared white cloth wrapped around his trunk. For those wishing for a positive future, they only need to touch the tree, make a wish ( it has to be a wish that causes harm to no one) and then leave a money offering. I’m not sure how the tree uses the cash, but maybe it proves the old saying that money really doesn’t grow on trees. There’s over a dozen voodoo statues scattered throughout the forest that are interesting to check out as well as a few giant trees inhabited by hundreds of fruit bats.

You can also arrange a Zangbeto ceremony with a local guide in Benin for the ultimate voodoo experience. The ritual begins with the entire village turning out with drums and voodoo bells. These colored ghost figures look like a cross between a haystack and a drive through car wash brush appear. They twirl in circles, with their straw spinning outward like a mini-tornado. Dancers corral these whirling spirits away from the villagers and then push the stack over to show that there’s no one on the inside. It’s a convincing illusion and the village kids are visibly frightened of some of these characters. In the past, these figures were the policemen of the tribe. Fear of consequences from making these creatures angry kept law and order in the community.

Voodoo is a big part of life in west Africa. Over half the population of Togo practices it. Even those who don’t, still have some belief in it’s practices. Togo and Benin are very small countries, but have lots of interesting things to see and are easily accessible from neighboring Ghana by hiring a private driver with a 4WD. Ghana is an adventure in itself. Check out my upcoming article about this wonderful country.