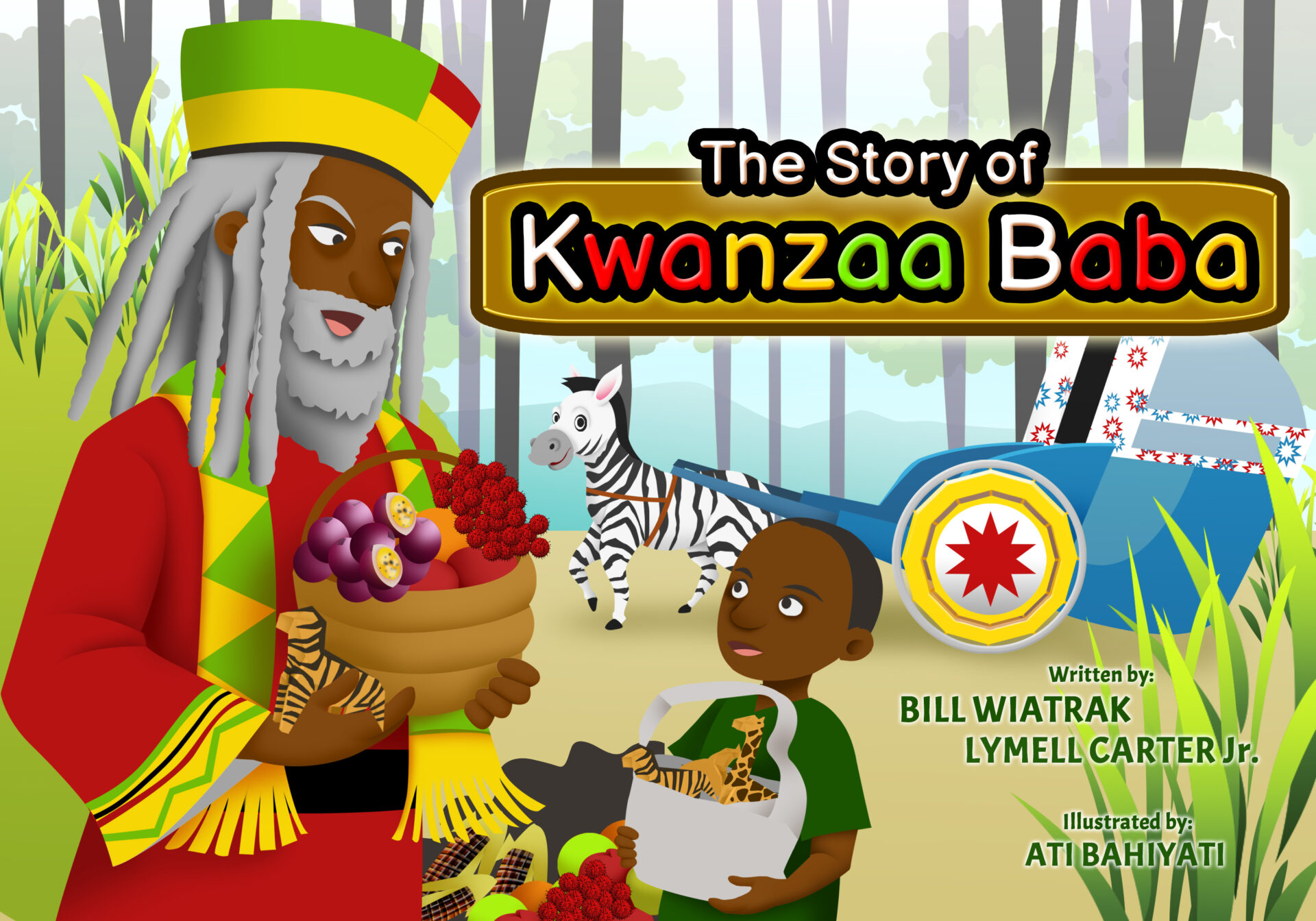 “The Story of Kwanzaa Baba”

I’m very excited about the publication of our new book “The Story of Kwanzaa Baba“. It’s a cooperation between myself and Lymell Carter Jr. and the first story to introduce some interesting original characters, recount an adventure originating in Africa and add some mythology to the Kwanzaa holiday.

Kwanzaa is a 7 day African-American holiday that celebrates unity, creativity, faith and four other essential principles associated with each day of the week. It was created by Maulana Karenga during the 60s as an original holiday and celebration for those of African origin who might not identify with the European based Christmas customs.

As an event planner, I’ve filled orders for live reindeer, Santa visits, snow, and elves every December. Each year we also get requests for African-American Santa appearances for predominantly black neighborhoods or private events. Lymell personally appeared as Santa for many of these and and that’s how the idea for this book came about. We were happy fulfilling requests for African-American Santa, but wondered why we weren’t getting calls for Kwanzaa. It’s been a holiday for over 50 years and a distinct cultural event that seemingly deserved more attention. Why weren’t people getting into it? Then it occurred to us.

Kwanzaa has the same stumbling blocks Christmas had in the 1800s. it’s not very fun for kids and no one is really quite sure what it’s about.

In the early 19th century, Christmas was nothing like it is today. Some thought it blasphemous to do anything on Christ’s birthday, some preferred to celebrate New Year’s and none of the characters we know, love and associate with Christmas had even been invented. There was the legend of Nicholas, an early Christian bishop from Myra who gave gifts to children and was associated with performing miracles. There was also the Yule goat, who somehow delivered presents (or demanded them depending on who you talked to). There were no elves, no Santa’s workshop… In short, Christmas wasn’t very interesting for children. it wasn’t even a national holiday until 1870. So how did the baby Jesus get mixed up with reindeer, Frosty and the Grinch?

In 1821 a poem called Old Santeclaus with Much Delight was published by an author named William Gilley. Santa looked nothing like he does today, but it was the first time anyone had every associated Santa with reindeer or really even written anything about him. The following year, A Visit from Saint Nicholas (The Night Before Christmas) was anonymously published by Clement Clark Moore. He considered himself a serious professor and didn’t really want the little poem he wrote for his kids attached to his name. . It was the first time anyone had created a description of Saint Nick or really discussed him bringing gifts. Christmas was still a controversial day at this time, so the fact that the story occurred the “night before” didn’t rock the boat with the fundamentalists. In fact, the book became a world-wide phenomenon!

It’s worth noting that Saint Nicholas’ name in Dutch is shortened to Sinter(Saint)and Klaas(short for Nicklaas). Sinter Klaus’s name became anglicized to Santa Claus in America. The original Dutch version wears a papal style hat, red and white robes and rides in on a white horse from Spain. In Moore’s book, Santa is a jolly old elf. For over a hundred years there were many different versions of Santa, some scary, some skinny, some tall, some fat. Then, in 1931 Coca Cola hired artist Haddon Sundblom to create Christmas advertisements for Coke and the red suit, jolly look and iconic picture of Santa enjoying a cola was the coolest that anyone had seen. America jumped on the new images and never looked back.

Holland ended up with a Sinterklaus and Santa Claus that were from the same origin, but completely different characters.

Montgomery Ward’s Christmas advertising forever changed the holiday as well. A booklet was created in 1939 by Robert May, an adman for the company, recounting the story of a reindeer with a red-nose named Rudolph. He was inspired while looking out a Chicago window into the fog and trying to think of a story line about reindeer for the book. It was designed as a give away to customers instead of the coloring books Ward’s had distributed in the past. After the recording of “Rudolph the Red Nosed Reindeer” in 1949 by Gene Autry, it became a number one record on the pop charts and Rudolph was added to the Christmas line-up of characters.

Could Autry strike gold with another Christmas song? The next year he recorded Frosty the Snowman, written by Walter Rollins and Steve Nelson. Yet even another new Christmas character was added to the mix. Nineteen years later, Frosty became a cartoon voiced and sung by Jimmy Durante. A Charlie Brown Christmas followed in 1965, The Grinch that Stole Christmas appeared in 1966 and the movies just keep coming. A holiday that originally started off with just baby Jesus, Mary and Joseph suddenly had more characters than a Pokemon trading pack.

Religious beliefs and commercialization of Christmas views aside, these characters are adored by millions. African-Americans that have grown up in the US may have grown up on the same songs and cartoons, but there’s definitely European origin undertones throughout the holiday: Yule logs from Norway, Christmas trees from Germany, even the north pole is located in Finland above the Arctic Circle.

What’s missing from the holidays is there’s little or no contributions to Christmas from Africa. The continent is rich in history, culture and tradition, but it has far less visitors than Europe and there’s much less known about it by the average person. So that’s where Kwanzaa comes in. Getting kids excited about Kwanzaa might be a challenge if you’re discussing unity and harvests, but a tale about a zebra who brings amazing tropical fruits to your home, is quite a bit more exciting. The Story of Kwanzaa Baba is the first book of it’s kind to introduce African culture into a kid friendly story about this holiday. The book borrows elements from Madagascar, Ghana, Kenya, South African and the African diaspora in the Caribbean.

When Christmas is over and Kwanzaa begins, it’s the perfect time to learn a little more about African culture and celebrate another great holiday. Did Kwanzaa Baba stop by the house and leave a rambutan? Did he hide a wooden toy? How do you play mancala? Where does the golden throne come from?

The release date has yet to be announced, but we’ll soon have a link to order your copy.