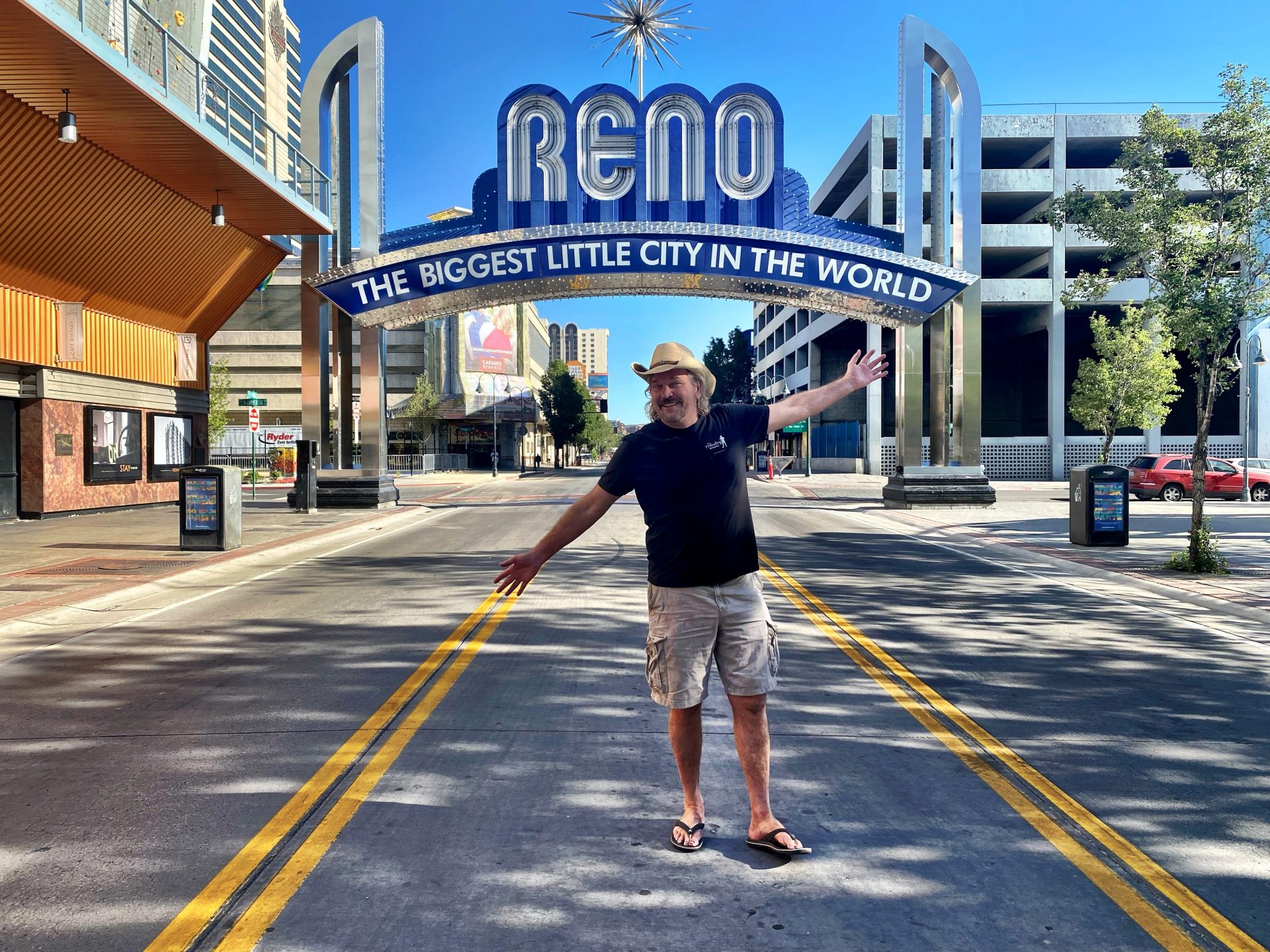 It’s the Biggest Little City in the World.

I arrived in Reno after two broiling days in Las Vegas and couldn’t help but notice the temperature had dropped 20 degrees from the 115 I’d endured on the strip. Vegas is miserable in the summer. Reno isn’t. If you’re traveling in Nevada you can’t help but compare the two. I’ve been to Vegas so many times, it was a thrill to try someplace different, but with all the things I love about Nevada.

I stayed at Grand Sierra Resort, a huge casino hotel with beautiful suites that overlook the river and has a lot of classy touches that make you feel like a rockstar. After a dip in the pool, I headed to the resort’s flagship restaurant,  Charlie Palmer’s Steakhouse. CPS is a world class steakhouse that mixes the classics (think wedge salads and manhattans) with modern fare such as soy glazed pork belly. As I was munching on snow crab and one of the most tender filets I’ve had anywhere, I asked the waiter what his favorite places were in the area. “Virginia City” he replied without a pause. He was so enthusiastic, I immediately put it on my list.

In Reno, you’ll see a few familiar names.  One is Harrah’s, the namesake of William Harrah, who almost singlehandedly made casinos customer-friendly by creating the Nevada Gaming Control Board. William also was an avid car collector and many of his best are displayed at The National Automobile Museum, one of  finest public car displays in the US. The collection begins decades before Henry Ford started manufacturing the Model T and showcases steam cars, the first battery powered cars, peculiar prototypes, and hundreds of beautiful automobiles that look as new as if they had just rolled out of the factory.

The Nevada Museum of Art is another nice stop with its collection of Native American and modern art. Everything is pretty walkable in Reno, so you can leave your car and explore the town by foot.

The downtown area has preserved much of its history and seems a little like Vegas if Fremont street was more spread out and had a river flowing through the middle of it. I walked past a man fly fishing as I looked down at the clear water. There’s a little river walk,  green parks and a little bit of a nature vibe. There’s also some nice art installations scattered throughout the town.

If you really want to immerse yourself in nature without straying too far from the casino, Lake Tahoe is less than an hour away from Reno. I did a day trip there and parked myself at Beach Bar, which coincidentally enough, is on the beach. The lake is stunning and of course there’s no waves, just fresh cool clear mountain water and miles of perfect sand. Tahoe is right on the state line of Nevada and California so all the casinos are on the east side of the line. If you find yourself there in the winter, there’s  great skiing there as well.

A short drive east takes you to Virginia city. The town has done such a fabulous job of maintaining  its Wild West cowboy look that all the city scenes of the TV show Bonanza were filmed there.  Mark Twain spent a few years there, living with his brother and scoring his first job as a reporter. Fortunes were made in the great silver rush at Comstock Lode, the first major discovery of silver in the US,

One of the most interesting spots in town is the  Washoe Club which has quite a haunted history. You can set up a tour while enjoying a watermelon margarita. The rooms upstairs have been left to the ghosts of the past and your guide Justin will be happy to tell you some creepy stories and show you videos he’s recorded of the supernatural forces lingering there. The town has its share of tourists fare such as fudge, antiques and old-time photos.

For a truly odd experience, you can visit the world’s smallest nation, Molossia. Although the country is a bit of a joke (it’s only open when Kevin is available), it’s considered an independent country and the dictator/president will arrange a tour for you. It’s quite entertaining to witness the amount of time and trouble Kevin Baugh has invested in his micro-country. You can even get your passport stamped.

In one trip you can visit the biggest little city in the world and the smallest country in the world. Now that’s bragging rights! Reno has direct flights to Houston with United and Southwest and is a great option if you’d like to try to change up your gamble-cation.