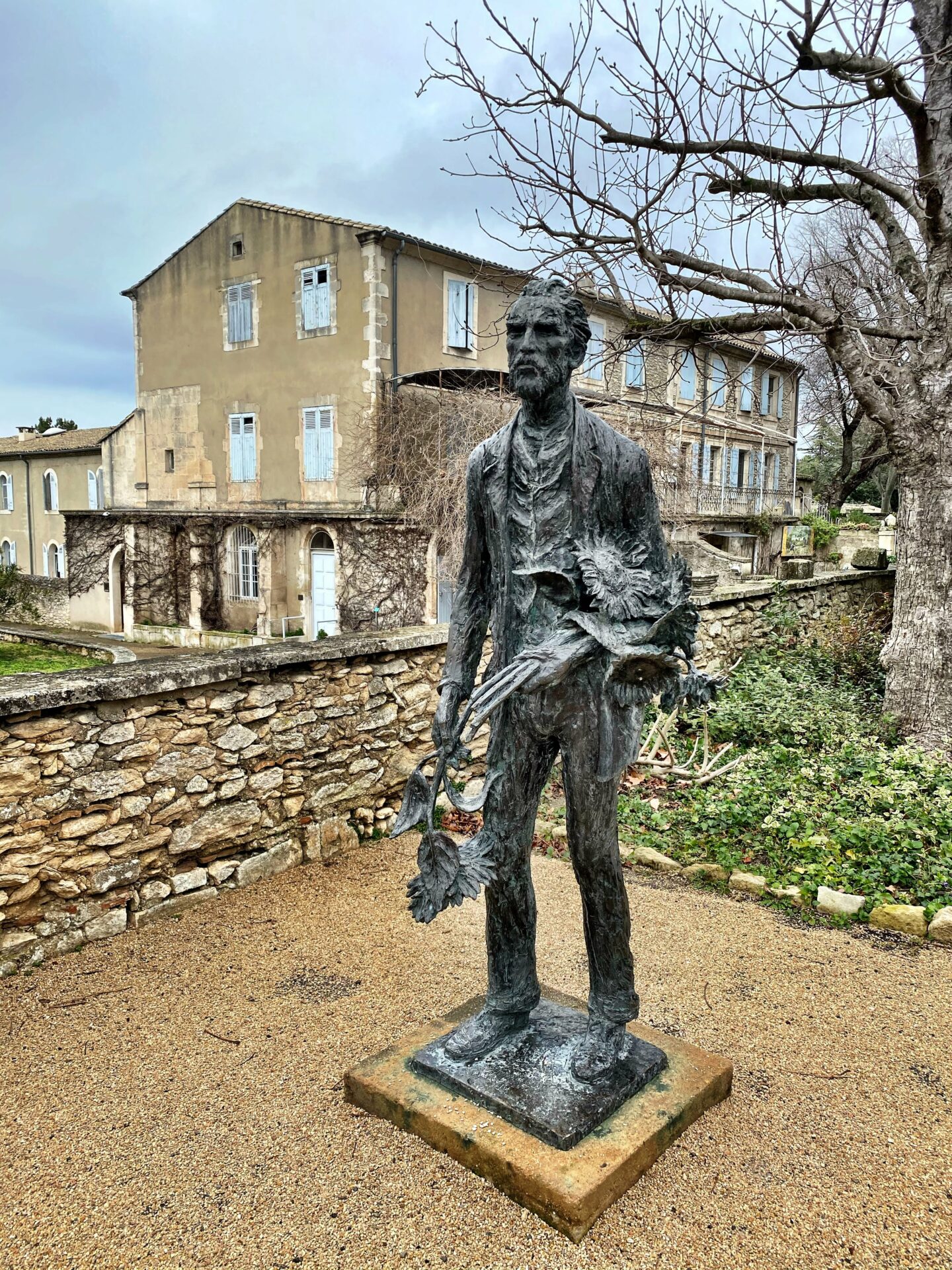 As the car pulled out,I waited until the last possible moment to run through the gate so the driver wouldn’t see me. I half expected an alarm to sound. There were lots of cameras. Who sneaks into an insane asylum? Okay, I’ll admit, I wouldn’t normally do such a thing, especially if I wasn’t even sure if I’d be able to get out. But, truthfully, this was no normal insane asylum and I had come too far not to do this.

I’d been tracing Van Gogh’s steps for 2 weeks and I felt like we were almost buddies after visiting so many of the places where he had lived and painted. This particular journey was focused on the part of his life after he moved to France and started painting in a more colorful and modern style. It was 1886 and Post-Impressionism was finding its footing in France and many young bold artists congregated in the Montmartre area of Paris each one trying to outdo or paint each other. Van Gogh had run out of money at his flat in Holland and moved into his brother‘s apartment in Paris.

My journey started in that neighborhood. A lot has changed in the 130 years that’s passed between the time that Vincent and Theo lived together in that apartment on 54 Lepic street, but there’s a marker on the building and the area is still probably the seediest one in Paris. Artists still congregate in Montmartre, but now it’s to do a fast portrait or silhouette of a tourist.Van Gogh painted in the streets and often used windmills (moulins) as his subjects in the 2 years he lived in Paris. Imagine the area with no cars and you’ll still find traces of his inspiration. Check out Van Gogh’s Le Moulin de la Galette or Boulevard de Clichy. The windmill and the street are still there.

My next stop was Arles. Arles is a magical town with history going back to Roman times. Less than an hour from the coastal city of Marseilles, Arles has a beautiful historical center with a Roman arena, ancient buildings and cobblestone streets. The stay in Arles was arguably Vincent’s most inspired era. After 2 years of the hustle and bustle of Paris, he wanted to start an artist commune and invited his fellow painters.
Paul Gauguin was the only one who showed up and lived with Vincent in the Yellow House for two months until theIr famous fight (where Van Gogh cut off part of his ear). Nothing of the house remains today, but you can see the buildings and the train bridges behind that match up perfectly with Van Gogh’s painting Yellow House at Arles. There’s a self-guided tour that takes in the places where Vincent painted and lived created by the Van Gogh foundation.  The more iconic spots have displays showing the painting in the place where it was most likely painted. You can walk in the places where Van Gogh painted and feel the magic. Just a few minutes from where the yellow house stood is the Rhône River. Step out along the riverfront at night and see the reflections of the buildings’ lights in the water and if the stars cooperate, it’s easy to see the real-life version of Starry Night on the Rhône. You can also drive to the Langlois Bridge crossing 10 minutes away and see a replica of the wooden bridge that Van Gogh painted 8 times.

The most iconic spot on the tour has to be Cafe Terrace at Night. Amazingly enough, the cafe is still serving coffee at the same spot Van Gogh painted it over a century ago.Have a Java at one of the outdoor tables or stand in the square and note the differences between the artist’s painting and the real place.

Van Gogh had a great run in Arles, but he eventually started having severe psychological problems and checked himself into an asylum Saint-Paul-de-Mausole near Saint-Remy-de-Provence. He stayed there under the condition that he’d have the autonomy to paint outside. He was even given an extra room to keep his paintings. It was here that he painted his most iconic work, Starry Night. This place was to be the highlight of my Van Gogh tour. It was only a 30 minute drive from Arles.

When I arrived, the entrance was closed with a sign explaining that the asylum had been shuttered for the holidays until February. I had flown all the way from Texas to make this pilgrimage and was more than a little disappointed. I rang the doorbell. No one answered. I called the phone number. Nothing. I followed the stone gate around to an office. A woman answered the door. I explained that i just needed a quick look, a photo and I’d be on my way. She told me no. I told my sad story once again and promised I would just only need one minute. I hoped that persistence would pay off.

I’d like to say that someone cared, but in the end all I got was a few French shrugs (the sort of shrugs that only the French can do). I thought about resorting to a loud “do you know who I am?” tactic but then considered that the asylum staff members have seen crazy and there wouldn’t be much I could do to impress them. I walked back to the car checking the site one last time for any possible points of entry. There was nothing except a giant stone wall surrounding the asylum, a locked door and a vehicle gate that measured at least 8 feet tall. The place was built to keep people from escaping and it appeared to work both ways. I realized my efforts were futile. As I started the car, I heard the gate open.

I’ve watched too many spy movies and played too many video games to squander the opportunity that had just presented itself to me. I dashed through the closing gate and suddenly I was in Vincent’s asylum. I didn’t have a plan or even an explanation if I got caught, so I just went in expecting the worst. Security might grab me at any moment. I wasn’t doing anything wrong but French people don’t like Americans acting like they own everything. I get that. I snapped a few pictures while expecting to hear sirens and guard dogs at any moment.I posed with Van Gogh’s statue. It seemed like I was in for an hour, but I was done in 3 or 4 minutes. Would I be able to get out? The exit door opened easily. I had seen what I wanted to see and no one yelled at me or locked me in an underground asylum room.Would I recommend that you try this? No. My advice is to NOT do this. Check the website for opening times and go then. Learn from my mistakes.

I had flown from Paris to Marseilles to see Arles and Saint Remy, but I wasn’t quite finished with my Van Gogh tour. I flew back to Paris. After leaving Saint Remy, Vincent moved to a small village about an hour’s drive northwest of Paris called Auvers-sur-Oise. I rented a car at CDG and drove to see where Van Gogh spent his last three months. As you travel through to this small town, you can see fields of sunflowers, haystacks and fields that look exactly like Van Gogh paintings. Vincent stayed at the Ravoux Inn (which remains there today) under the care of a physician and churned out almost 70 paintings. On July 29, 1890, he shot himself in the chest in the field where he’d been painting and somehow managed to get back to the inn. His brother Theo rushed to his side and was with him when he passed away two days later. Van Gogh was buried at a small cemetery at the top of the hill in Auvers. Theo died the same year and is buried next to him in a plot covered with ivy. As i visited his grave I was touched that a fan had put a bright sunflower on his grave. After 130 years, Vincent is more famous than ever.

I finished my tour by driving to Amsterdam, 5 hours north of Auvers to visit Vincent’s largest public display of paintings. The Van Gogh museum is full of of some of the painter’s most famous work as well as providing a timeline of the artist’s 10 years as an artist. Most of what we know about Vincent’s life comes from the correspondence between him and his brother.These letters are part of the museum’s collection and visitors can hear and see snippets of some of the content translated. The museum exhibits his more famous paintings, but contains many of his lesser known works as well as his early masterpieces such as The Potato Eaters.

Vincent Van Gogh led a fascinating life in spite of the fact that he only lived to be 37. There’s no better way to learn about an artist than to experience and see the world through his eyes. Add these stops to your next trip to France and you might be surprised how interesting it can be immersing yourself in the places where Van Gogh’s art began and ended.