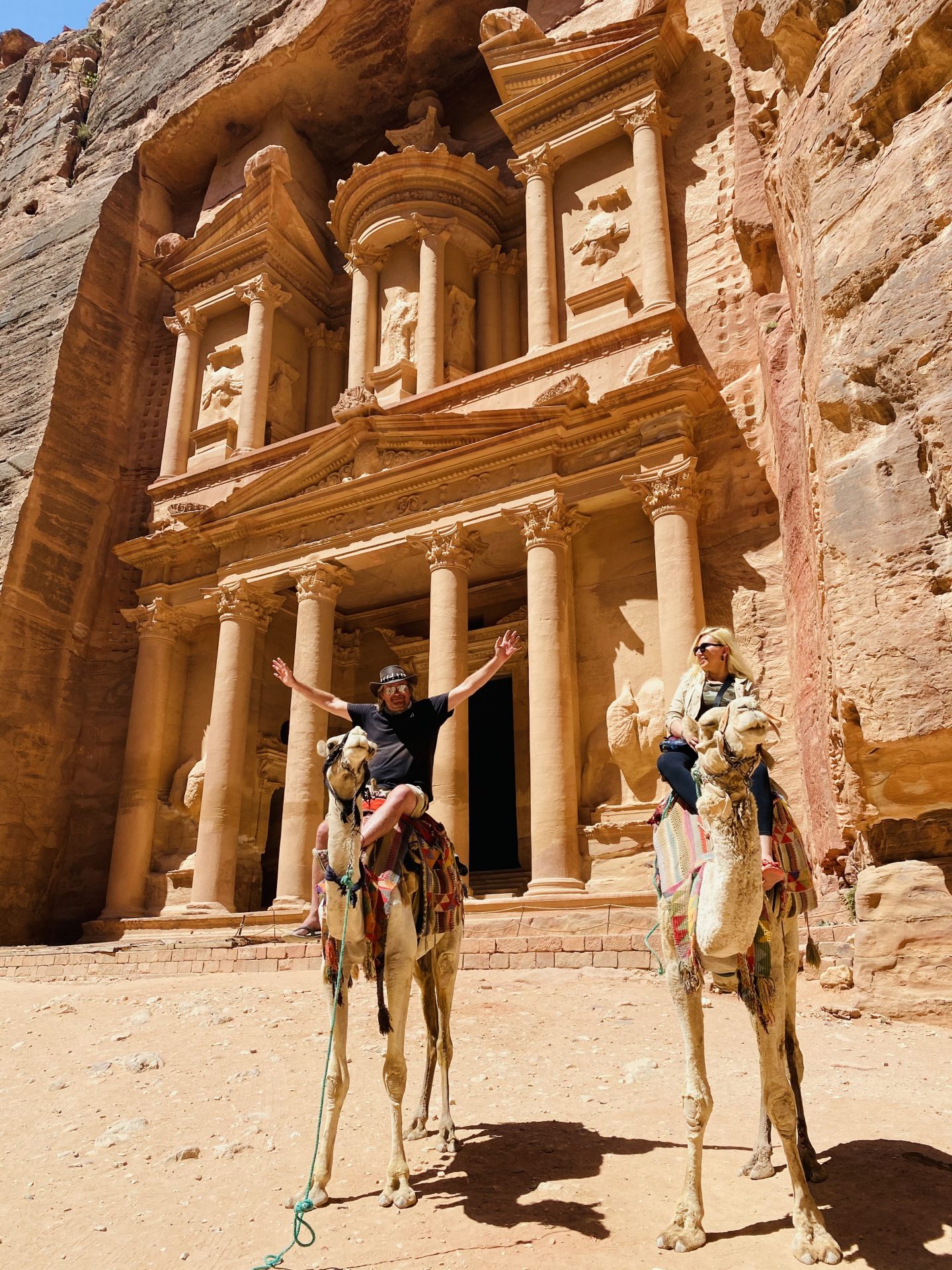 Visiting the 3rd Wonder of the World Now

It’s one of the most impressive archaeological sites I’ve ever seen. After being featured in “Indiana Jones and The Last Crusade” and then being named one of the seven wonders of the world, the ancient Jordanian city of Petra was catapulted into international fame. Mobs of tourists started arriving and just kept coming. The quiet desert ruins were starting to lose their magic to noisy tour buses and irresponsible tourism.

Then everything stopped in 2020.

Now that Jordan has reopened, business is slow for the first time in decades. The tourism industry is desperate for visitors and you won’t have to fight hordes of people to buy a ticket or ride a camel. Prices are much easier to negotiate and you’ll have the place to yourself.

Petra is about 2,000 years old snd was built by the Nabateans. It’s building facades carved out of the cliffs are built on a massive scale  that has to be seen to be believed. The most iconic photo op is the building from Indiana Jones, which is referred to as “The Treasury”.

I visited Petra in 1999 but was anxious to revisit this year with a set of different eyes. Digital photos weren’t a thing back then and i was hoping to capture better pictures than I had in the 20th century. The best time to visit the site is early in the morning when it’s still reasonably cool. Many travelers arrive the evening before, stay the night and then visit the ruins as early as 6 am. We decided to go “full-Bedouin” and found a cave on Airbnb to stay. Our host met us in Little Petra and led us to the Bedouin camp. We were the first visitors since COVID,  so we got to hang out with a few locals, and had dinner by the campfire.

It was the first time I ever spent the night in a cave and the owner made sure we had everything we needed. We were already prepared with bottled water and a battery powered light just in case.

We arose early and headed to the archaeological site. We were one of the few visitors for the day, so there was no line. The entrance fee was one of the most expensive tickets I’ve ever bought for a natural attraction ($75) but it’s well worth it. Once inside, the souvenir vendors used every tourist line they could muster to get me to look in their shops. When I realized that no one has had any business for over a year, it’s difficult to be that irritated by them.

The entrance ticket includes a horse ride to the canyon entrance, but the horse wranglers will sometimes offer a deal to visit Petra from the backside. This involves a half hour ride up the mountain and about a 15 minute hike.  The other option is to walk through the narrow canyon to the treasury. We opted to do the horse ride and come back through the canyon by foot. Once we dismounted our horses and scrambled through some brush, our guide pointed out the nearby mountain where Aaron, Moses’ brother is buried. Visiting Petra from above was supposedly disallowed after years of out-of-shape tourists hurting themselves, but at the moment, there are no rules.  I can’t really put into words or capture in a photo how amazing this place is. As you step to the edge of the canyon and look down on the treasury, it’s absolutely stunning. The building is carved into the side of the cliff and it seems impossible to create such a thing, even with modern machinery, let alone tools from 2,000 years ago.

After shooting every angle photo we could think of, we crawled down the rocks to the main area in front of the treasury. Camel owners were waiting patiently to have a chance to talk us into a photo with their dromedaries. That’s how it works here. There’s someone nearby to fill every need, including ones you don’t realize you have. After the camel photos were done, the mule rental boy magically appeared, ready to take us to the furthest attraction, the Monastery.

We resisted his rental attempts in favor of walking through the site on foot. Unthwarted, he took his team of mules a little further down the trail.  He waited patiently because he knew better than we, that we could only say “no” so many times before we’d agree to ride rather than walk in the scorching heat.

As one makes their way through the Rose Red City, the limestone mountains are riddled with seemingly endless caves and buildings carved by the original inhabitants. There’s the ruins of the Petra amphitheater as well as numerous tombs and climbing trails to get to them. Souvenir stands along the paths seem seem to have the cold drink you’re looking for just at the right moment.

The mules we had refused three times waited anxiously at the beginning of the trail leading to the monastery. After a brief negotiation we were back in the saddle again, riding past the locals and up the steps carved into the mountain. What happened after that was a thrill ride scarier than any roller coaster. The mules hoofed their way up the trail that seemed impossibly steep. In spite of the great distance, they knew that they’d get to stop once they arrived at the top, so they struggled up the hellish staircase past exhausted climbers and small souvenir stands higher and higher until the ruins below were almost out of site. It seemed that we might careen over the cliff’s edge at any moment. At one point the road became so steep and narrow, the mules had to stop.

From that point, we could see the beautiful reddish canyons below and wondered once again what manner of people could climb up here to create a massive building carved into a mountain. Not just how, but why?

We climbed to final stretch of stone steps to reach the highest point, The Monastery. The building style was similar to the treasury, but was even more impressive when we noticed the small dots in front of the entrance were people. This gargantuan building dwarves even the temples of Luxor in Egypt.

You’re not allowed to enter the monastery. Not only is the entrance too tall for a human to scale but there’s really nothing to see inside other than 4 featureless stone walls; it’s substantially less exciting than it’s wondrous exterior. The best thing to do is grab a cold drink at the restaurant facing the building and marvel at the magnificence of it all and watch the visitors who opted not to take the mule ride.. If I could offer one bit of advice: TAKE the mule!

Getting back to the entrance takes nearly an hour even with horses and mules, but the trail through the canyon is simply magnificent. If you’re up for a little extra adventure, there’s a small Petra museum outside the entrance with treasures found from the site. Entrance is free.

Jordan doesn’t require a visa for US travelers. It’s also one of the safest middle-eastern destinations and is full of many other amazing sites. Visit now before everyone else does.