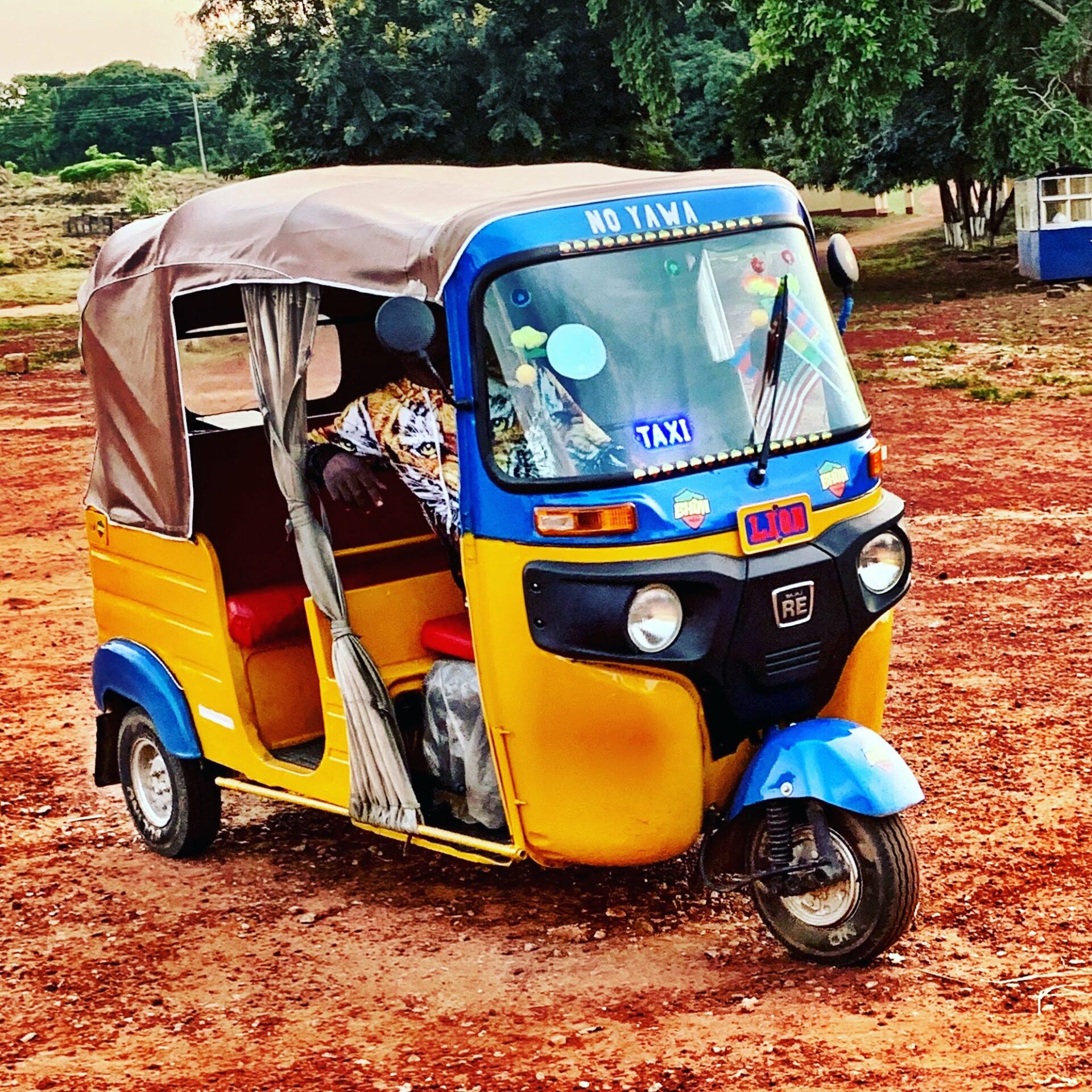 How to visit West Africa Without Hurting Yourself

I had read a lot of blogs about visiting West Africa before I left for my travels and almost every story had recurring themes: Transportation was difficult, border crossings laborious, bus rides were unpleasant and the police stops were annoying. I had allowed myself two weeks to go overland from the Ivory Coast to to Nigeria. An ambitious trip like this requires some planning. The distances aren’t great, but bad roads, not being able to drive in some countries and challenging visas can all slow you down. Hopefully this article will help you if you’re thinking about making this journey. If you go super cheap, it’s going to be painfully slow. There’s not a lot of great transportation options in this part of the world unless you have a car. A 4WD and a guide can get you anywhere you need to be.

Visas– The Nigerian visa is a bureaucracy nightmare. You have to go to the embassy in person (Washington or Atlanta) and have all your trip prebooked even if you’re not even sure that you’re getting approved for a visa. It’s hundreds of dollars and requires jumping through hoops with pre=approved credit card payments, expediting fees and employee attitude. Much of the country is dangerous as well, so you’ll need to stick to the safe areas of Lagos or take travel risks. Unless you’re dead set on seeing it (as I was), I recommend giving it a miss. If you decide to go, as much as I don’t like wasting money on visa services, this might be the one time you fork over the extra money and let someone else deal with the bureaucracy. The Ghana visa expedited can cost $200, but it’s straightforward and much more pleasant than the Nigerian visa process. If you’re in Houston or another city with an embassy, you can have your visa in less than an hour.

Togo visas can be negotiated at the border and Benin and Ivory Coast visas can be procured online. In the case of Ivory Coast, you’ll have to take your online pre-approval to the immigration office once you arrive at the international airport and have your fingerprints and photos recorded. I wanted to go from Nigeria all the way to Ivory Coast by road. It seemed impossible, but actually was quite easy the way I did it. Here’s how you do it:

Step 1- Fly to Nigeria– Nigeria can be challenging. Most of the country is too dangerous to travel. Lagos and the capital Abuja can be visited as long as you exercise normal precautions. If you’re traveling by road, expect to be stopped dozens of times by police looking for a bribe. This can be solved by hiring a driver who deals with them every day. My driver had a relationship with each one. Some he agreed to pay next time, others carried a balance from him overpaying the day before. Bribes are small, but there are a lot of stops. As I stated before, the Nigerian visa is the most difficult to get because of all the fraud that’s committed in that country. Tickets to Lagos are usually the least expensive option in the US to get to West Africa which is why it’s the first step.

Step 2- Fly one way to the Ivory Coast– Cote d’ Ivoire (the name in French) is well worth a visit. Besides having the world’s largest basilica (Our Lady of Peace in Yamoussoukro), the historical coastline city of the former French outpost of Grand Bassam makes a wonderful stop. In the Ivory Coast you can rent a car and drive yourself around the country as long as you have a smattering of French. Many travelers opt for Yamoussoukro to Abidjan route as a good introduction into the country. You won’t have to deal with the police bribes or crime stats of Nigeria, but incidents have occurred and one still has to exercise caution. To get in the country, you’ll have to apply for a visa online. When you arrive at the airport, the biometric process is finished at an office just inside the building. Taxis are quite expensive, which is why renting a car is suggested as the best way of navigating the country. Abidjan has a few worthwhile sights to see and is a good base for the first day of your trip in Ivory Coast. Grand Bassam is only about an hour south of the capital and makes a great overnight stay as well.

Sightsee in Ghana– Ghana is the gem of West Africa and is where you should spend most of your travel time. There’s a lot of great historical places along the coast, plus Mole safari park in the north and the historical kingdom of Kumasi halfway between the two.To get to Ghana from Ivory Coast, I paid my rental car company a little extra to let me drive to the Ghana border with their driver and he would take the car back after dropping me there. On the Ghana side, my new driver picked me up and we began our trip overland. A guide/driver was about $100/day. We had to pay a surcharge for fuel and a little extra to cross the Togo and Benin borders with him. Having a driver for your trip is really the only way to go. You have someone that can explain the history and the customs of the people. A good guide can take you into the market and let you try things you wouldn’t even notice. He can take you to local restaurants for a fraction of what you would normally spend. On the trip we opted to drive along the coast and visit the stilt village near Takoradi, the slave castles at Elmina and Cape Coast and then Kakum National Park. On the way to Tamale, there’s a nice waterfall, an interesting monkey cemetery and the fantastic market of Kumasi. You can stay in Mole National Park to take a morning safari and then fly to Accra from Tamale or head down the eastern road that runs to Ho waterfall if you have the time. You can use the day that it takes your driver to catch up with you to explore Accra.

Spend a Night in Togo– Togo has a pretty straightforward crossing. You’ll have to get out of the car, fill out a few forms, and wait for someone to stamp your passport, but that’s about it. Lome has a vibrant market and has the distinction of having the world’s largest fetish market. That’s fetish as in voodoo objects: parts of animals used in rituals. You can sit down with a shaman/witch doctor and buy some voodoo paraphernalia or just walk around and take in the bat skeletons and dried lizards. Either way, you’ll get your IG worthy photos. Lome had the best hotel I stayed in in Africa as well as one of the best restaurants. It’s a good place to shake off the African funk if you need to decompress. Most travelers just follow the coast and do a night in Lome, others take a bus all the way through to Ghana. I definitely recommend a stop in this interesting little country.

Visit Benin-Benin is where voodoo unofficially started. You can visit the python temple in Ouidah, a nearby sacred forest with crazy statues and attend a wacky voodoo ceremony where the whole village turns out and puts on the show just for you. As exciting as the voodoo sites are, I was more impressed with Ganvie, a colossal stilt house village built on the lake near Cotonou. Two days in Benin is about all you need to see it’s main sights. You should spend the night in Cotonou so you can be geared up for the trip to Lagos.

Back to Nigeria– My guide was afraid of going to Nigeria and had never traveled there. Ghanaians have this mixture of competition and wariness about the country to the east. You’re unlikely to get someone to take you from Ghana to Nigeria, but you can arrange your transport at the border. You’ll find scores of taxis that do exactly that. It was around $100 to have someone drive the 4 hours it takes to get back to Lagos, but plane flight costs for this tiny distance are astronomical and bus rides are unpleasant. The taxi fee included all the bribes along the way. Within the first hour of crossing the border, I counted 27 stops by officials and at least ten bribes. If you don’t pay the bribe, the police can look for something wrong with your car and delay you all day. There are even several instances where drivers have complained and were shot in remote areas. Bribes are usually under $1, but it is truly annoying to be stopped over and over. It’s not a pretty drive, but once you’ve done it, you can add it to the list of things you never have to do again.

It took two weeks to make this trip with half of that in Ghana. It’s a pretty fast pace, but I don’t feel like I missed out on any major attractions. It’s a completely different experience than eastern or southern Africa, but it’s very interesting and you’ll never have a dull moment.