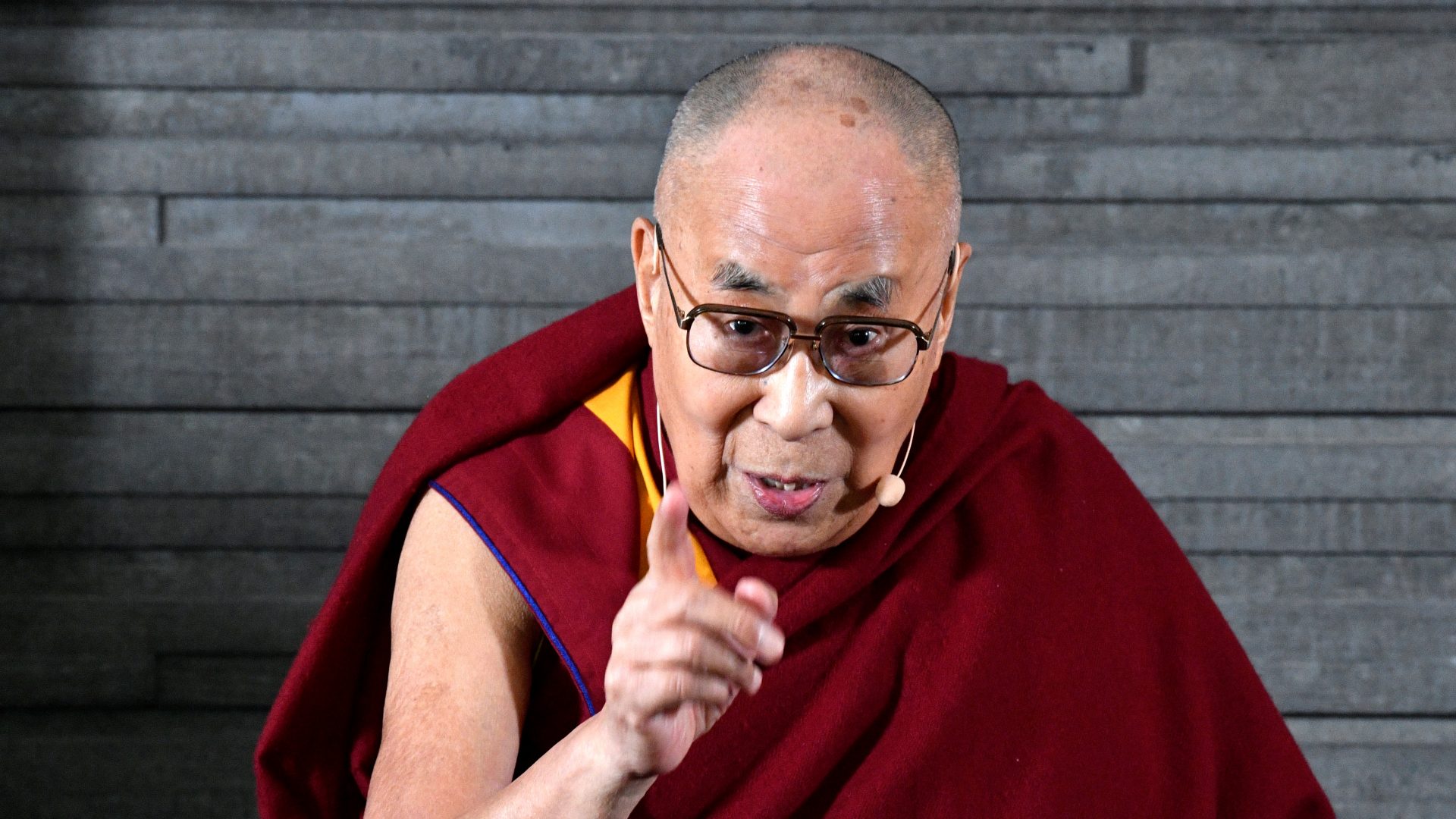 I’m a bucket list traveler. At the moment I have a list of 26 things on the note app of my phone that all seemed to make sense when I added them; places I plan to go, people I hope to meet and lofty goals like visiting every country in the world. If it wasn’t for my “lists”, I’d never get anything done. I’m not sure how “Meet the Dalai Lama” got on my radar, though. I think a friend of mine showed me a photo they had taken with him, and I thought it would be cool to do the same. You never know who you might run into when you travel a lot. I’ve bumped into celebrities like Bono and Bill Clinton in the strangest places and I suppose I’ve always been a believer in the concept that “if you put it out in the universe, it will happen”

“Where is the Dalai Lama?” you might ask yourself. When he’s not running around the world doing television appearances, he’s got to live somewhere. I knew a little of the history of Tibet and how he had fled his country when the Chinese government decided to make it their own. He wandered through villages for a fortnight with an entourage of political exiles until he was able to seek refuge in India. But where was he in 2022? I did a little more digging and found an email for him.

So, how does one write an email to one of the most famous spiritual leaders in the world? Dear Mr. Lama?…. I must admit, I was a little nervous, but I let my words spill onto the page and I explained how I’d really like to meet him. I asked him where he might be doing a public appearance and explained that I would come to wherever that might be. I anxiously awaited to hear back from him.

I received no reply. I sent my email again. Nothing. Again. Not a word.

Coincidentally, I had an upcoming month-long trip planned to India. “Stay on a houseboat in Kashmir” and “see a tiger in the wild” were also items on my bucket list and I hoped to do both. It wasn’t my first attempt to see a tiger, mind you. I’d been on safaris in Bangladesh, Nepal and even India’s Ranthambore National Park in the 90s, but as of now I have never been successful at spotting a single one. My upcoming trip to India was going to leave nothing to chance. I was allowing myself a week in one of the best possible areas of India to see a tiger.

A week before the trip, one of my travel partners asked me how things were going with my quest to find the Dalai Lama. I explained that I’d written him and hadn’t heard back. He looked at me with a sarcastic grin that implied “you’re giving up that easy?” Okay, challenge accepted. I started Googling the Buddhist leader again and this time I struck gold. The Dalai Lama was scheduled to speak to a Korean group in the northern region of India in a town called Dharamshala in November. Tickets were free, one just had to get there, register a day before and you could obtain an audience with his holiness. Could it really be that easy?

It wasn’t really easy. The Dalai Lama was speaking right in the middle of my tiger safari week and he was in a town which isn’t exactly the easiest place to visit in India. No trains go there, bus rides are long and gruesome and if I rearranged my travel plans and nothing went wrong, we could fly there and just make it there before registration closed. We’d also have to drive 4 hours from the tiger sanctuary, catch a flight to Delhi and then another to the state of Himashel Pradesh. Would we even be allowed to visit this temple where he was speaking? No one could really say. We decided to just take a chance.

When we arrived in Dharamshala, we discovered that it’s really two cities in one. The Indians live in the valley and the Tibetan community lives in the mountain above. The area is called Mcleod Ganj and it’s unlike anywhere else in India. It’s a little slice of Tibet selling Nepalese and Tibetan souvenirs and offering authentic restaurants that serve food from the same region. I was reminded of some of the tourist markets in Kathmandu when I visited in the 80s. The main temple is called Namgyal Monastery and is the headquarters for the Dalai Lama. It’s also the place where His Holiness would be speaking for the next two days.

It was easy enough to find the registration area. We just followed the line of westerners dressed in hippie clothing, orange clad monks and older couples that looked like they had just finished a yoga class. For such an out of the way place, there were more westerners than we had seen in the entire 3 weeks we’d been in India. I suppose the Dalai Lama might be a target for some political agendas, so his handlers were leaving nothing to chance. Passports were checked, photos taken and ID badges created. The price was less than 50 cents. Seating was first come, first served. After we got our badges we wandered into the temple to see that hundreds of mats with people’s names on them had already been placed in the best viewing areas. I don’t even think the Rolling Stones have such dedicated fans as the “Lama Heads” that were securing their seats the day before the show.

We loved Mcleod Ganj area. I found myself buying incense and Tibetan tea as well as one of those ohm musical instruments that sound like a cross between a steel drum and a doorbell. Maybe I needed a little relaxation after NOT seeing a tiger for the 5th time, since I’d cut my safari time short to meet the DL.

The next day we woke up early to grab a remaining seat (if such a thing was even possible). The crowd had started arriving hours before the event was scheduled to start and security was tight. No phones or electronics of any kind were permitted. I had considered hiding my phone in a place security would never look, but it turns out there is no such place. The pat down left no area untouched. Once inside, I could see that both levels of the temple were filled with spectators. There was a main room where His Holiness was going to be speaking and the Koreans who’d requested him were seated inside. Everyone else was going to have to be content to trying to catch a glimpse at him through the window or a door. I had already visited his office, pulled my press pass and was told that I could meet him if I was willing to wait a few days. Unfortunately I had to be in Jaipur for my flight home and I had barely been able to have time for the last minute trip. Taking a photo of him was impossible without my phone, so the best I could hope for was to catch a peek at him through the window.

Not to be easily dissuaded, I walked down the steps to bug his office one more time but the ground level had gotten a little wilder than it had been an hour before. News cameras were everywhere and the audience was on their feet. It was getting close to the time when the Dalai Lama would be arriving and you could feel it in the air. As I walked down the sidewalk, it became clear that I was exactly where I shouldn’t be. Security motioned for me to stand behind a barrier. Apparently, I was right in the path of His Holiness.

And suddenly there he was. He emerged from the gate, walking slowly with assistance and smiling at the excited crowd. He waved and slowly hobbled down the pavement while cameras flashed and media scrambled to get out his way. Everyone in front of me bowed in unison and there I was, six feet away with a clear line of sight staring at the Dalai Lama. Next to me was a girl with blue hair and I was wearing probably the only cowboy hat in India. How could he not see us? He looked up at us and waved. Or maybe he just waved at me. Maybe, just maybe he realized at that moment that he hadn’t answered any of my emails and the wave was his opportunity to say “Bill, I got a little busy, but hey…nice to see you”.

The Dalai Lama was getting the kind of attention that’s usually reserved for rockstars. He had a power or presence about him as he strode past and made his way to the area where he was to speak. Although he speaks Tibetan, Hindi, Chinese and English, this speech was going to be in Tibetan. In spite of the language barrier, I could still feel the power of his message. I’d seen him on TV a few times so I recognized him immediately, but there was something about being there with him and his followers that can’t be described.

As we got on the plane and headed to Rajasthan, my group all agreed that seeing the Dalai Lama was way better than another tiger safari. 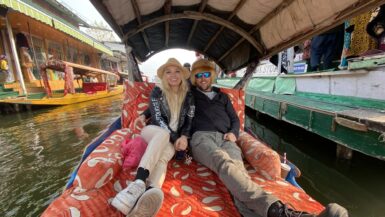