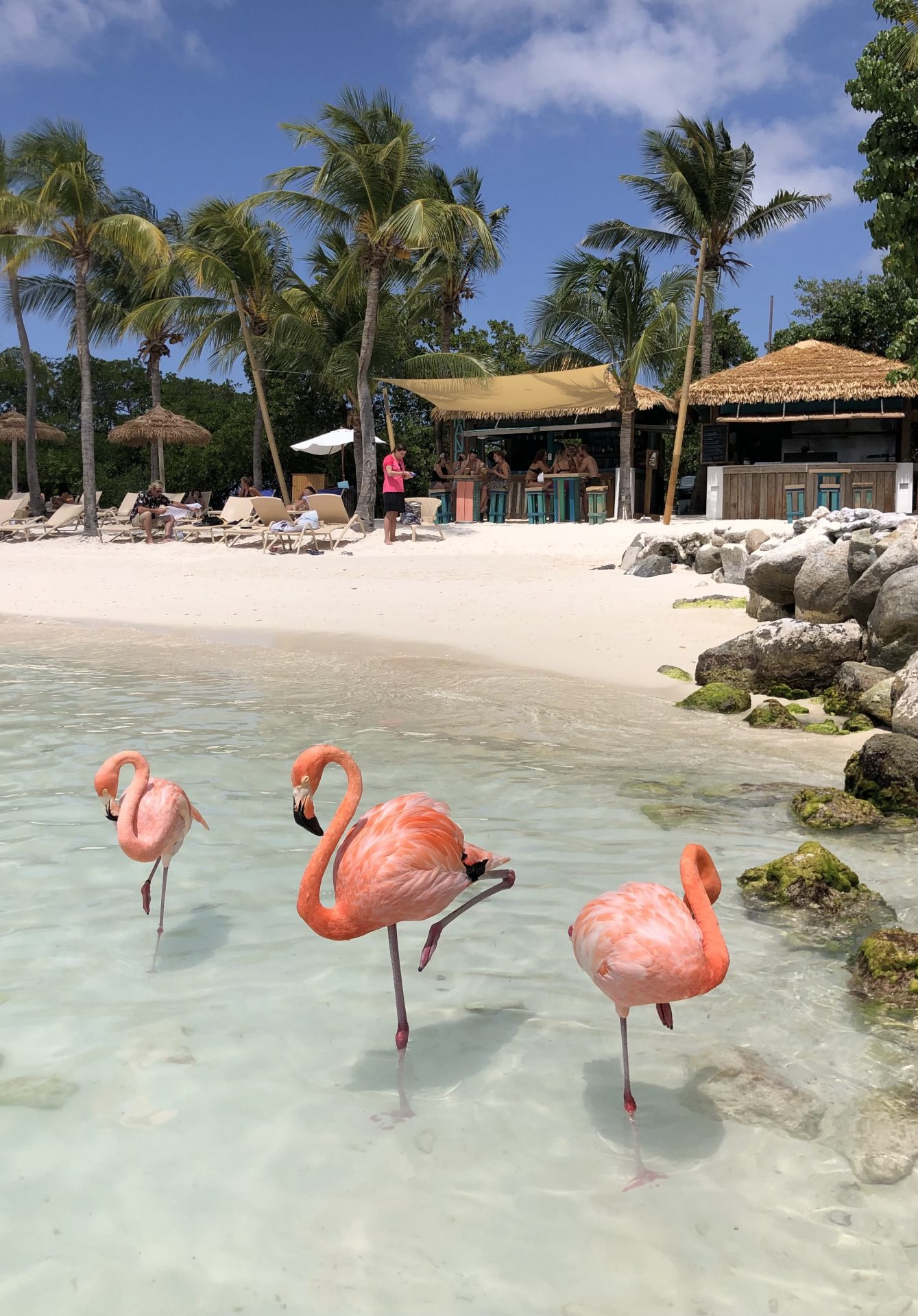 Flamingos on the Beach- Aruba

We’ve all seen the picture on Instagram. A pretty girl posing in turquoise water surrounded by hot pink flamingos. No clouds, a sugary white beach, and a frozen tropical drink. Ahhhhhhh…… It’s hard to believe that such a place exists in the real world, but it’s just a 2 1/2 hour flight away from Miami to reach perpetually warm Aruba. Lest we forget, “Aruba” is the first word in iconic Beach Boys’ song Kokomo, so it’s got to be good, right? And if you think for a second Kokomo might be better, you might be disappointed to know that it’s the only imaginary place in the song.

Aruba is an autonomous country and a member of the ABC islands (the catchy acronym that includes Bonaire and Curacao) Formerly the Dutch Antilles, the island is a melting pot of Dutch, South Americans, and natives born on the island. Everyone speaks 4 languages including Papiamento, an interesting mix of Spanish, English, Portuguese and Dutch. Only 18 miles long, Aruba is a scrubby desert full of tall cactus plants and beautiful beaches. And yeah, there’s flamingos.

There’s two places to get your flamingo photo in Aruba and they’re both on private islands. In my travels, I’ve visited flamingos all over the world and it’s rare to get close enough to get a decent picture of one of them in the wild, let alone a selfie. De Palm Island and Renaissance Island have solved that problem by domesticating their birds and keeping tourist numbers in check. Busloads of camera wielding wanna-be-flamingo-petters can be terrifying for the animals, so one has to be a visitor on one of these islands to mingle with these rosy-colored creatures. First rule is, no petting the flamingos.

Don’t worry, the birds won’t let you forget that rule.

De Palm Island is the best option for those seeking an all-inclusive experience. A boat ferry whisks you across the water to the island which is full of activities including water slides, snorkeling, and banana boat rides. There’s a water park for the kids and lots of inviting beaches for those who don’t want to do anything. There’s an open bar and buffet included in the price, which given the price of an alcoholic drink in Aruba, makes it an especially good deal. The flamingos are from Brazil and are usually hanging out on the VIP beach. You can upgrade to a cabana and hang out with them all day with your own bartender and refrigerator, or walk over and snap a selfie during feeding time when they migrate to the more public area. If the island isn’t too crowded, the management might let you hop the fence so you can get some one-on-one time with the flamingos. The birds have to be approached slowly and don’t like to be touched. However, “Charlie” might take a shine to you and give you a flamingo pedicure. Okay, it’s more of a gently pecking your toes for no apparent reason, but flamingo pedicure sounds a bit more exotic. Prices are $104 for an adult, $80 for children.

Renaissance Hotel has their own private island as well. You can visit for free if you’re staying in the hotel and make a reservation for the day you’d like to go or you can buy a day pass to visit the island for $125. There’s no open bar or buffet on this island so you’ll need to bring your own drinks/snacks or buy some there. They do offer upscale fare like lobster and drinks served in a coconut. There’s more of an adult vibe on this island and it’s a bit more spread out than DePalm with a mangrove area and some stunning beaches. There’s also aptly named iguana beach and flamingo beach where you can visit either species. The flamingos are a brighter orange (they’re from Chile) and there’s a “Charlie” there too. This Charlie is less nice than De Palm’s Charlie and since he’s kind of a loner and bigger than the others, he’s easy to spot and avoid. The beach is a bit bigger too, but there’s no restriction on who visits the flamingos, so you’ll find a bit more competition for pictures. The birds here seem to spend more time in the water, so you can sit on a nearby rock or get a handful of flamingo pellets and entice them to let you give them a snack. Flamingos don’t like dry food. They prefer to eat it out of the water or if they eat out of your hand, they’ll dip the food into the water before swallowing it. The boat from the hotel literally sails into the hotel to pick you up through a Venetian style canal (which is pretty awesome) or you can catch it at the end of the pier near Jimmy Buffet’s “5’O Clock somewhere” bar.

This stop has dozens of iguanas sunning themselves on the rocks, so if you didn’t get your fill of them on Renaissance Island, you’ve got another chance to bond with them. They loved the dog food pellets I found at a convenience store nearby.

You won’t find flamingos anywhere else on Aruba. You can find wild donkeys and goats, but they’re never going to get the oohs and ahhs you’ll get with a flamingo selfie. Nearby Bonaire has some marsh areas that naturally attract wild flamingos but you’re unlikely to get within 100 yards of them. Also, there’s really no affordable way to island hop between the three islands. A 30 minute flight can cost almost as much as a round trip ticket from Miami. So, book your flamingo excursion. It will be money well spent.